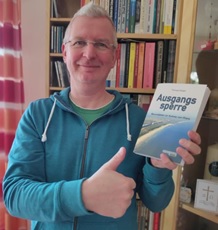 Book author and former construction soldier Thomas Weigel reads from his novel “Ausgangssperre” (Engl: Curfew), which was inspired by his own experiences as a conscientious objector within the GDR at the Prora military base.

Blurb: The novel is set in the late eighties in the GDR. Bernd has refused to serve in the army with a gun and must begin his eighteen-month service as a construction soldier in Prora, in the Colossus of Rügen. Will he be pulverized in the conflicts between adaptation and rebellion, in the struggle for dignity and against arbitrariness? What are his wife Karin, a teacher in a state kindergarten, and their two-year-old daughter Lara going through at home in the Erz Mountains? How resilient is the friendship of Bernd and Markus, who secretly organizes spiritual life in the company in the style of the early Christians?

About 15,000 young men served as Bausoldaten between 1964 and 1989. We still need their example today, their unbroken will to create peace without weapons and to stand up against the seeds of the Cold War in politics, society, and the media as well as against forms of intolerance and exclusion.