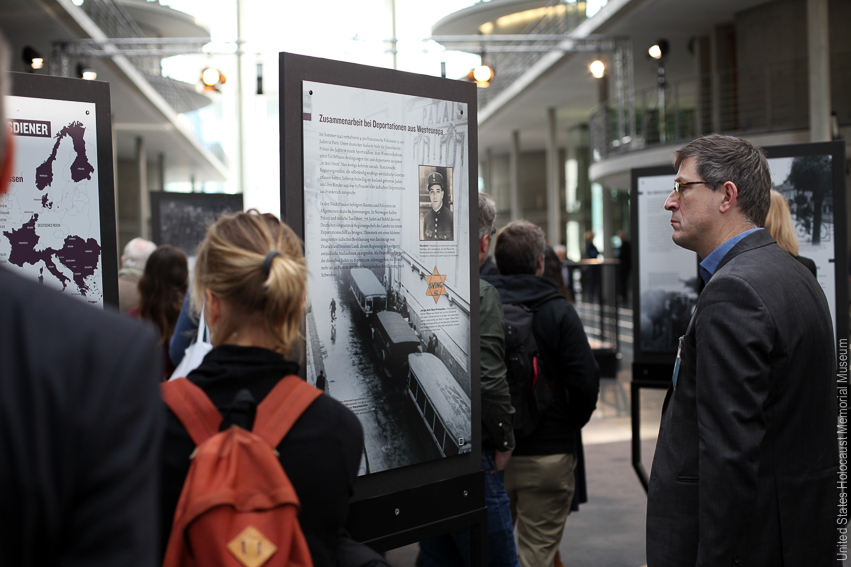 The opening of the exhibition “Some were neighbors: perpetration, complicity and resistance”, conceived by the United States Holocaust Memorial Museum, Washington, scheduled for June 19, 2021, cannot take place as originally planned due to Corona hygiene regulations. As a substitute, we are choosing a hybrid event format, the video of which will be available on the PRORA CENTER website beginning June 23, 2021.

Following a greeting by the PRORA CENTER director, Sara J. Bloomfield, director of the United States Holocaust Memorial Museum, will give an introduction to the exhibition. Dennis Grunendahl, research associate at the PRORA CENTER, will then lead a tour of the exhibition with two students from the Ernst-Moritz-Arndt-Gymnasium, Bergen on Rügen.

“Some Were Neighbors: Perpetration, Fellow Travelers, and Resistance” addresses one of the central questions about the Holocaust: How was the Holocaust possible? The central role of Adolf Hitler is undeniable, but they were dependent on countless others. What role did ordinary people play? Why did so many support the crimes of the National Socialists or remain silent? Why did so few help the victims? The presentation encourages people to think about their own possibilities of influence for a better future.

The patronage of the exhibition in Prora is the Minister-President of Mecklenburg-Western Pomerania, Manuela Schwesig. In addition, she has made a statement about the exhibition, which can be seen printed in the exhibition, as well as statements by the President of the German Bundestag, Wolfgang Schäuble, and Sara J. Bloomfield. We are thankful for this support and, of course, our sincere gratitude also goes to the United States. Holocaust Memorial Museum, which generously supported us and made this presentation of the exhibition possible in the first place.

PRORA CENTER will offer an educational program for groups to accompany the presentation, which will be on view from June 20 through September 15, 2021.

(Contributed photo: “Some were neighbors: perpetration, complicity, and resistance” on January 30, 2019, at the German Bundestag. Caro Kadatz for the United States Holocaust Memorial Museum).